There’s a story that Errol Morris, Academy Award winning documentarian (The Fog of War, 2003) once convinced Werner Herzog to help him dig up a dead body for research. Morris never made it to the graveyard, and the departed stayed in the ground. Herzog would later lose a bet that if Morris actually completed a film, he would eat his shoe. Notorious for his early inability to finish projects, Morris has gone on to be one of the most respected and influential documentary filmmakers in the world.

There’s an intense edge to the man Morris, and there’s an intense edge to his films. He is known for perfecting the ‘first person’ interview technique, where the subject looks directly into camera whilst talking. Unlike most interviews, which place on onscreen or off screen interviewer as an intermediary, ‘first person’ removes the block and puts the viewer in an active role, claims Morris.

When someone watches my films, it is as though the characters are talking to directly to them… There is no third party.

But it is easier to talk to a person face to face than to stare into the cold hard eye of the camera. Morris’ early films saw him attempt to counter this by placing his head directly next to the lens. This meant that when shooting Gates of Heaven (1978) and his groundbreaking The Thin Blue Line (1988), the director of photography would have to try and keep Morris’ head out of shot by pulling on the back of hair, something which the director admits he quickly grew tired of. 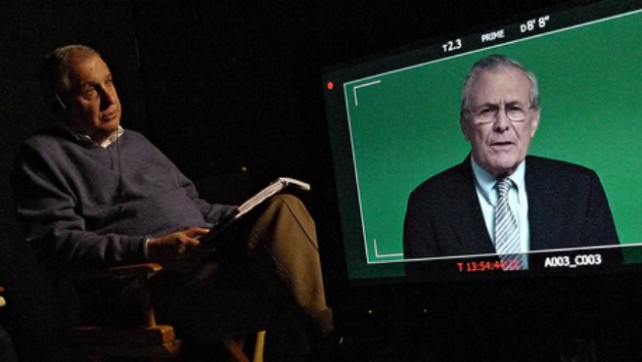 The solution presented itself in the form of teleprompters, commonly used by news anchors so that they can read a script and address the viewer at home directly. Instead of projecting a script, Morris and his contemporaries (including Steve Hardie) would project the face of the interviewer onto a glass, meaning that the subject would be looking at a face placed directly over the lens. Morris called his system the Interratron, using it on numerous acclaimed films, and successful commercials for companies like Apple and the US Democratic Party. 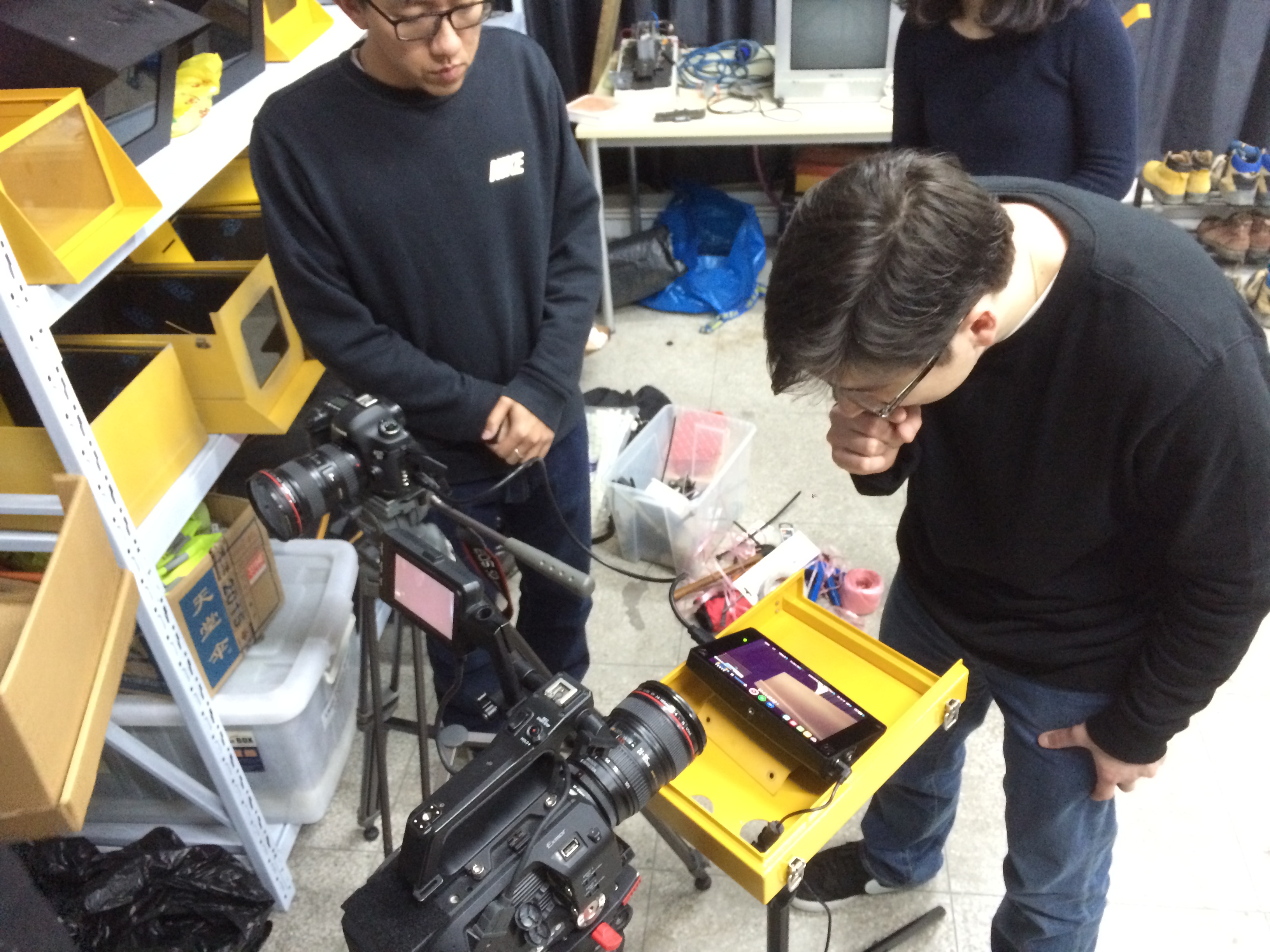 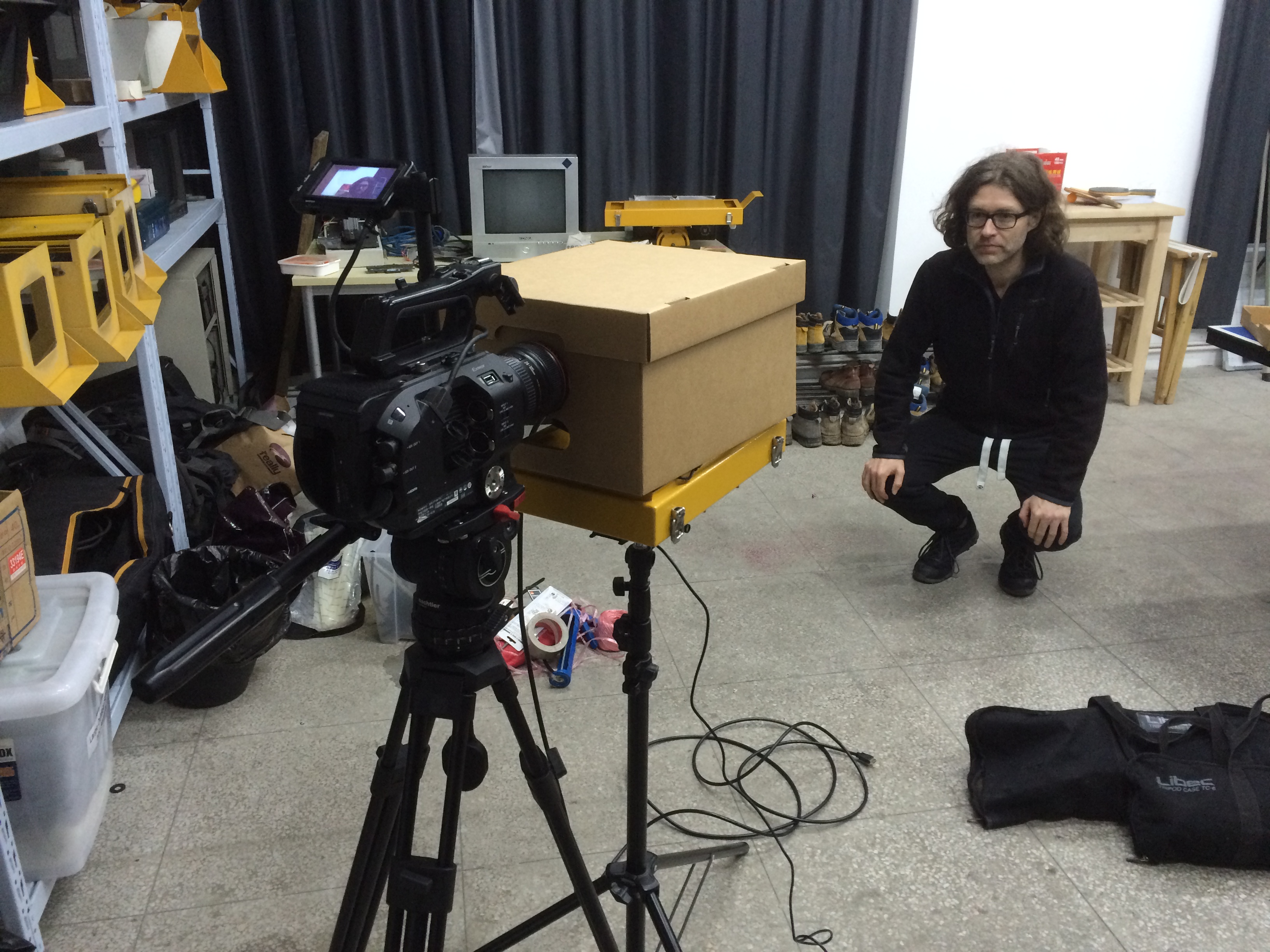 Two weeks ago in the LP Films office, we set ourselves the task of building our own version of the Interratron for an upcoming commercial project in which we want the viewer to connect with the subject like an old friend. Here’s the basic principle sketched by Steve Hardy, one of the system’s early innovators. 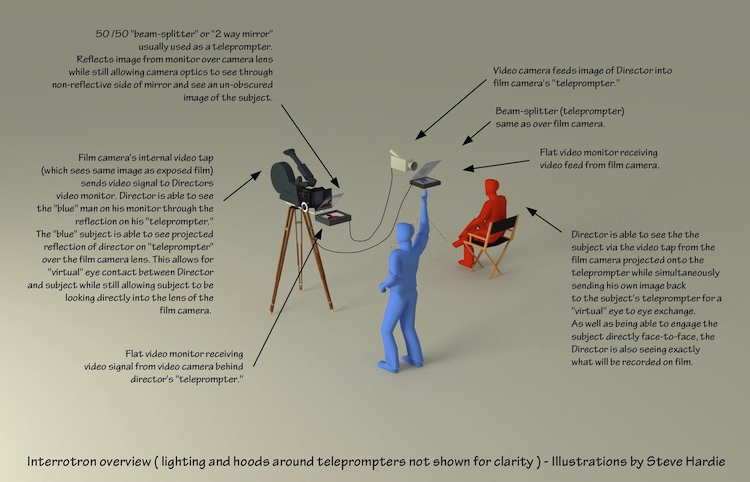 One camera points at the director, the other at the subject. The image from the director’s camera runs to a screen mounted face up in front of the subject. Above that, an angled piece of glass reflects the image so that the subject can see the director’s face, an image which is lined up so that by making eye contact, they are looking directly into the lens of the second camera. A feed from there allows the director to monitor the shot.

The project is being undertaken by Arthur and Andrej, and is still in experimental phase. The biggest challenge we’ve encountered is the type of glass to use. Clear glass produces a doubled image (with both the front and back of the glass, only millimeters apart, reflecting the screen) Mirrored glass removes this problem, but has greater opacity, meaning the image is darker. 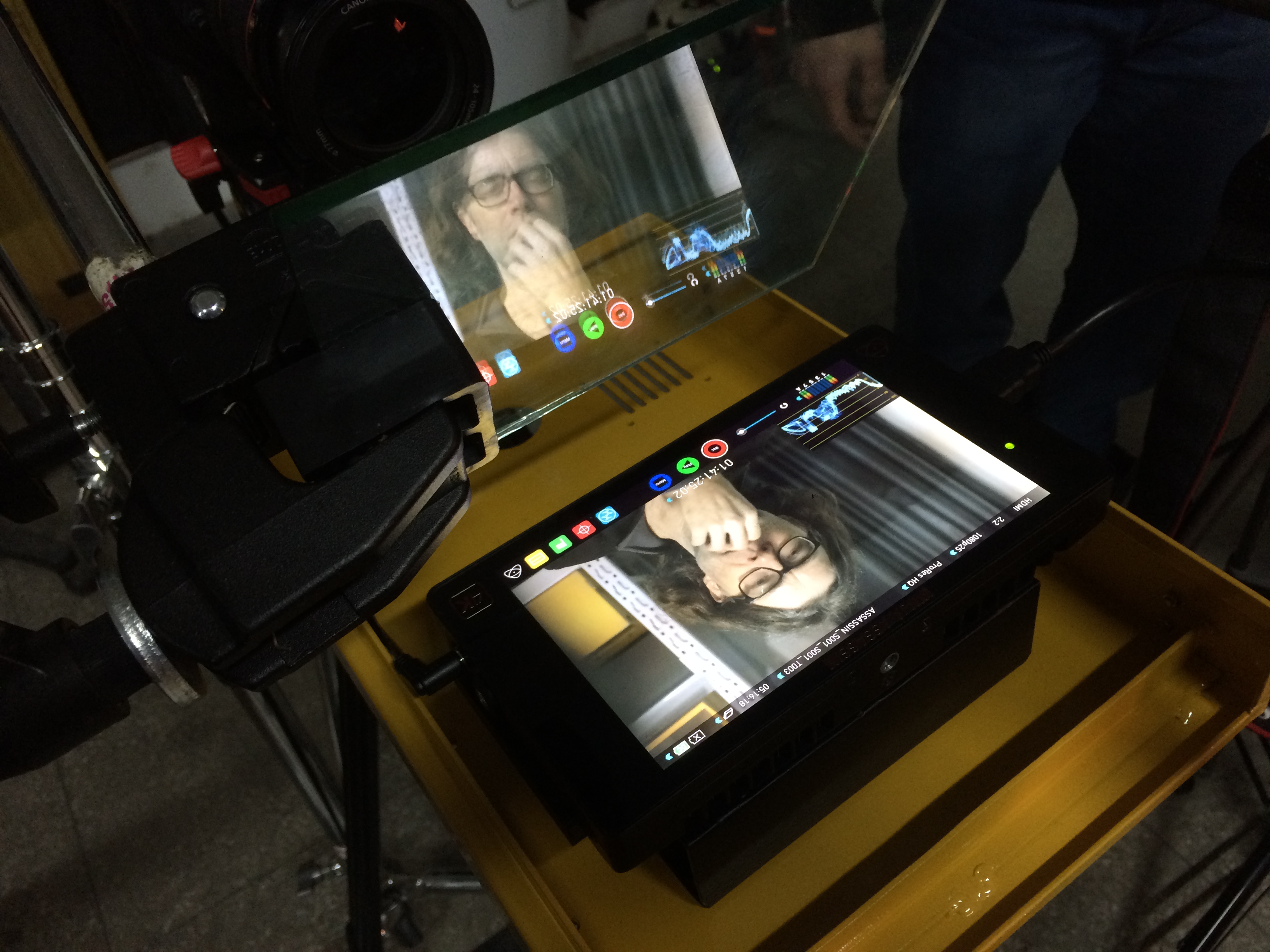 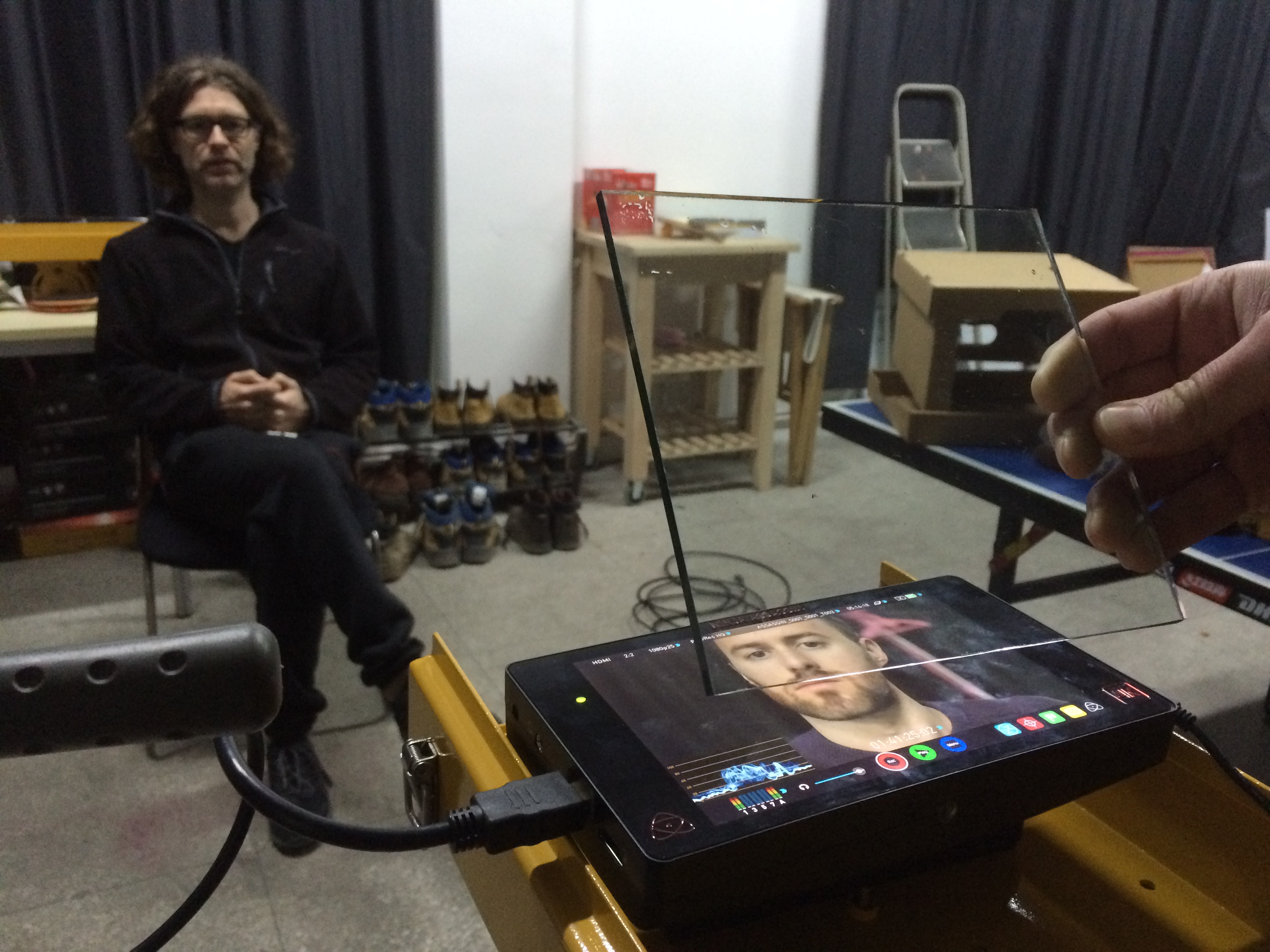 But the guys love to experiment. Just this morning, a box of glass samples arrived for us to play around with. Perfection comes from trial and error, and like Errol Morris, we are working towards a system which works for our specific purposes.

What’s it like to use? Morris’ producer Ted Bafaloukos said,

The beauty of this thing is that it allows people to do what they do best. Watch television.

We’ve enlisted the help of staff from surrounding offices to model and test the prototype, and they’ve been surprisingly comfortable. The Interratron removes the barrier between audience and subject whilst being as strange to use as a telephone. When will it be ready to shoot with? We’ll be using it in an upcoming commercial shoot, but not everyone is convinced it will be ready… 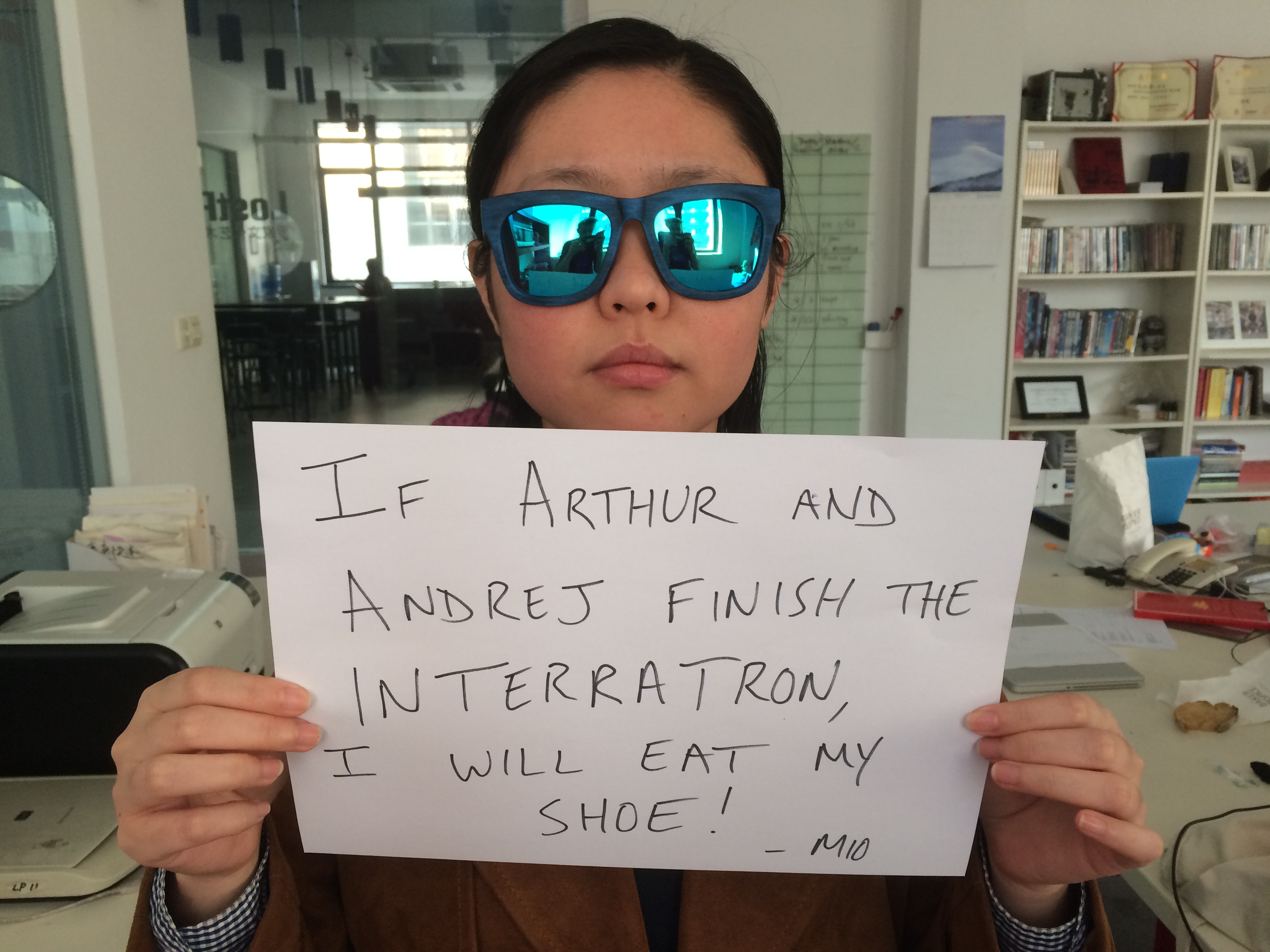