There were eight Chinese aboard the Titanic when it sank in 1912. Six survived. Who were they? What became of them?

LPFilms and Merryman Films are pleased to announce a new documentary, THE SIX, an amazing untold story of disaster, prejudice and survival. The film is currently in production, and directed by  Arthur Jones. 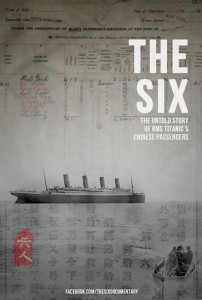